How to Install PIP on a Mac

PIP is the package management tool for Python libraries. If you’re using Python on your Mac to build applications, you’ll want to install PIP to easily install and use these libraries and software packages.

Assuming you already have you installed python, you may need to install or update PIP. There are several ways to do this, depending on your level of risk.

If you want to install PIP on a Mac, follow the steps below.

If you are using Python 3.4 or later, you can use the command ensurepip. This is the official method for installing pip in Python, providing a safe method to install the application (if necessary).

Using the Pip Install Script on Mac for Python 3

An alternative method to install PIP on Mac is to use the pip install script (get-pip.py). This is only available for Python 3 users.

YOU CAN ALSO READ:   How to Check Data Usage on iPhone

Note: This script is safe to use, but we always advise caution when allowing an online script to run on your Mac. You should only use this PIP installer script if you are aware of the risks and are willing to proceed. Otherwise, use one of the other methods instead.

To use the get-pip script to install PIP on Mac: 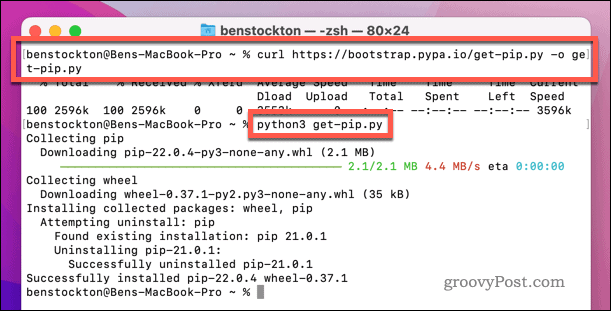 How to use Homebrew to install PIP on Mac

If you want an easier way to install PIP, you can use Homebrew to do it. Homebrew is a third-party open source package manager for your Mac. It allows you to quickly install apps via the Terminal app, including PIP.

Before continuing, make sure install homebrew on your mac.

To use Homebrew to install PIP on a Mac:

How to check the version of PIP on a Mac

YOU CAN ALSO READ:   How to Download Apps on Amazon Fire Tablets

You can also run this command to check that PIP is installed correctly on your Mac.

To check the version of PIP on a Mac:

How to update the PIP on a Mac

To update the PIP on a Mac:

If you’ve followed the steps above correctly, you should be able to quickly install PIP for Python on a Mac. You can then use it to install external Python packages and libraries from the official PyPI repository.