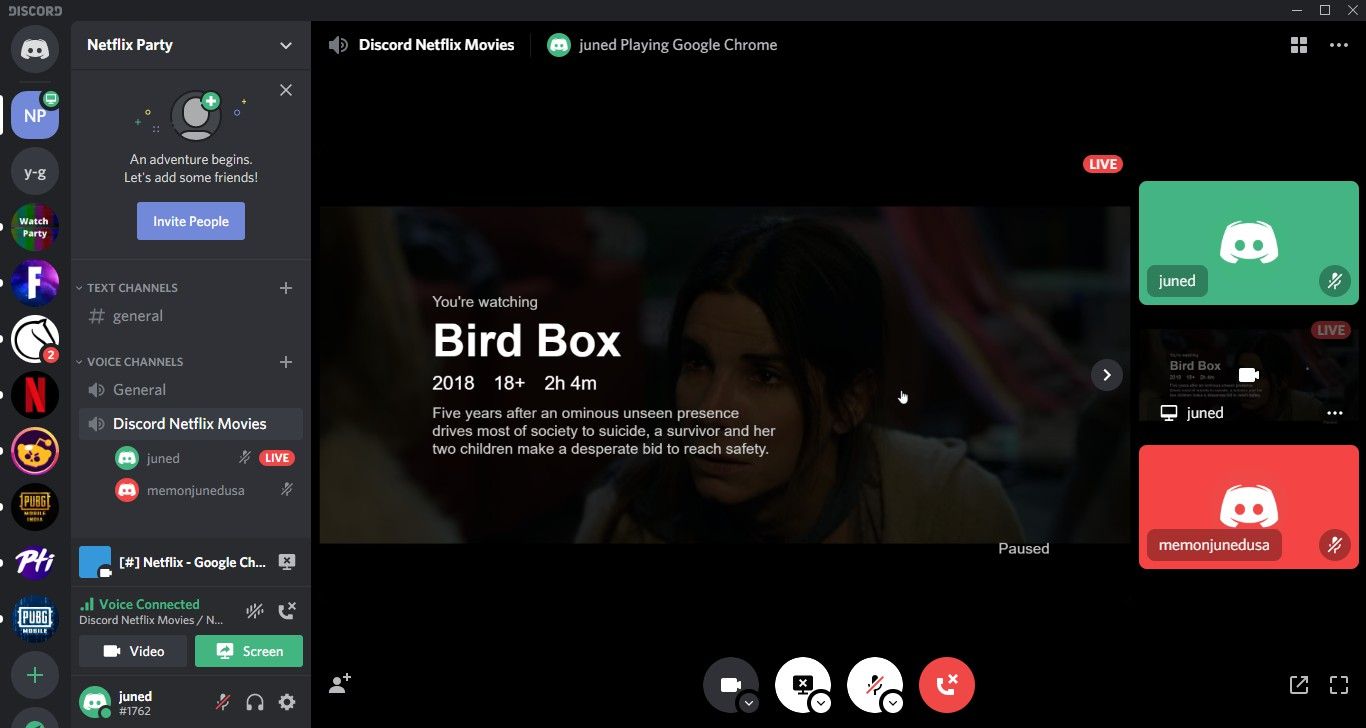 How to stream Netflix on Discord?

By Carlos Garcia November 11, 2021 5 Mins Read
Contents hide
1 Stream Netflix on Discord step by step
2 Potential issues to consider
2.1 Stream audio is not heard
2.2 The screen goes black
3 Is it possible to do it on iPhone and Android?
4 Conclusions

Discord is one of the best apps for gamers. One that, since last year and in full confinement, has conquered millions of users around the world, especially with the help of Among Us. Well, nowadays it is still widely used for those who want to have fun in a group, and although many think that it cannot be done, streaming Netflix on Discord is possible. We review how to do it and what to consider then.

The first thing we must clarify in this regard is that, indeed, Netflix streaming is a likely action in most applications, platforms and devices and, of course, there was no shortage of those who thought it would result very interesting to be able to stream movies and series to watch with your friends.

In this way, we are going to show you what Go Live is and why it could be the best solution that you and your colleagues have when trying to share content of this type through a Discord server.

YOU CAN ALSO READ:   Settings for the recycle bin in Windows 11

Well, the fact is that just as you can create a Spotify group listening party on Discord, you also have the possibility to enjoy your favorite movies and series, by sharing Netflix on Discord, as follows.

Of course, you have to keep in mind that if you are using Discord on your Mac or PC, everything will be easier, while later we will see if there is an opportunity to do something similar from iPhone or Android.

Of course, the interesting thing about this tutorial is that you can stream a movie or series, leave the camera on, and make your friends see your reactions to what happens on the screen, commenting on them together.

Stream audio is not heard

Audio ones are some of the most common issues among gamers and viewers on Discord.. It will be important to find out, then, what is causing them.

In general, some of the reasons behind this problem have to do with the accesses allowed to the app through the Computer Settings, such as a malfunction of the audio drivers.

YOU CAN ALSO READ:   How to take photos of fireworks

Beyond that, it is also true that this Screen Share function has not been available for so long and that, from time to time, it may present some operating problems that end up hindering the experience.

If you are using Discord, there is a high probability that you have witnessed a black screen when trying to stream your games or other content. Still, there are a few attempts you can make.

The first thing is to check if your Discord app is updated to the latest version, and the second thing is to turn off all the programs that run in the background and could be occupying your RAM memory and graphics card.

If none of these solutions improves the situation, you may need to reinstall Discord.

Is it possible to do it on iPhone and Android?

Regrettably, Unable to stream Netflix through the Discord app on your Android phone, being that the only option we have left is to make a voice and video call, as you normally do.

From there, you can create a public or private server and invite your friends to join, and while most prefer closed servers for their close ones, others opt for open ones to meet new people.

In the case of iPhones, Discord does not allow any user to stream or share the screen of activities like this, so again you will have to limit yourself to making a voice and video call.

In summary, although you can share a Discord screen on mobile phones, this function is focused on video games, tending to produce problems when you try to take advantage of it with other content.

YOU CAN ALSO READ:   How to change the spam protection level in Outlook

For now, this is what you can do to stream Netflix on Discord, although other OTTs offer us more direct, more native outputs, such as when using Watch Party on Amazon Prime Video.

Anyway, we think it is a solution that can be useful in many cases, especially if you manage to get rid of the aforementioned obstacles, such as the lack of audio or the screen that goes black.